Racism and the Arts: From ‘Invisible Man’ to ‘The Hunger Games’

“I am invisible, understand, simply because people refuse to see me.”

This quote was one of many statements Ellison made about his identity as a black man living in the early 20th century in his novel “Invisible Man.” As a 15-year-old, reading this novel proved to me the power of the arts. The arts allow people such as Ellison to express themselves, but they also allow consumers to connect, understand their own lives and sometimes transform themselves. The arts provide several benefits to humanity, but one important gift art gives us is the ability to see society. Whether it’s from our own point of view or another point of view, the arts allow us to take a hard look at ourselves. Sometimes it’s to see good things. Sometimes it’s to see bad things. Sometimes the arts sound the alarm for change or call for action. Sometimes the arts just question society. Sometimes the arts show appreciation for something good in our world.

Today, 13 years since I read “Invisible Man” and 60 years since the book was published, I was reminded of this novel because of reactions to another piece of art—“The Hunger Games” movie. The film, based on a book series of the same name, has received a lot of attention due its box office success, but also due to several racist reactions. Following casting decisions and initial viewings of the movie, several young people tweeted and posted in forums negative responses to two major characters who are portrayed by black actors. Despite the book describing them as having brown skin, several book readers said they were surprised and even upset at the casting decisions. 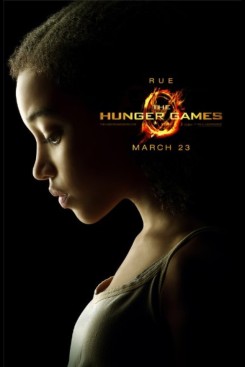 In an excellent article in The New Yorker, journalist Anna Holmes questions the idea of a  “white default” people seem to use as well as the inability of people to see beyond race. She makes the point that one of the most telling tweets, which read “Awkward moment when Rue is some black girl and not the little blonde innocent girl you picture,” shows that a lot of people in our culture associate whiteness with innocence.

Holmes writes about Ellison’s book and these reactions to “The Hunger Games” that “’Invisible’ can mean unseen, but just as often it speaks to others’ inability to see beyond something, or someone.” She also links this idea to the controversial Trayvon Martin case and those who say all his shooter saw was that he was black, therefore not innocent. She writes, “I am thinking the same thing: of our culture’s association of whiteness with innocence, of a child described without an accompanying adjective, of a child rendered insignificant and therefore invisible because of his or her particular shade of skin.”

While not the worst tweet, one that physically made me sick read “Kk call me racist but when I found out rue was black her death wasn’t as sad #ihatemyself.” I can’t possibly understand how anyone could think this, yet alone tweet it. But unfortunately, racism is alive in today’s world. I am heart-broken, outraged and angered by these comments. My initial impulse was to unleash a rampage on these incidents, but sometimes that’s not the right action to take. Instead, I used my own art—writing—to express myself. I look to journalists, peaceful activists and artists to raise awareness and to examine our society. There’s no simple answer, and I know the arts won’t solve racism, but I do think the arts can achieve change. And I hope people allow the power of art to open their minds.

← This.
The Walkmen debut new song →