Yesterday, the music world united around news of alternative rock band R.E.M.’s split after 31 years in the business. Tweets—from both R.E.M. haters and R.E.M. fans—immediately popped up follow the band’s announcement on its website. By late afternoon, blogs and websites posted heartfelt tributes. Today, more in-depth articles analyzing the impact of the band in our culture surfaced on sites such as Salon and The Atlantic. But then, Facebook stole the show. 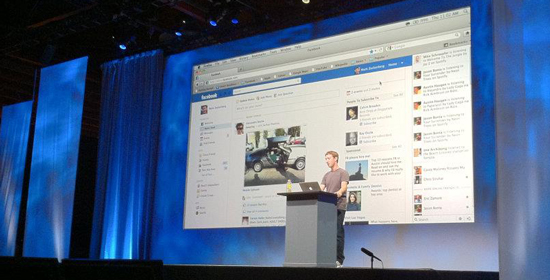 CEO Mark Zuckerberg now wants the world of music to revolve around Facebook. In an effort to fashion Facebook as an online musical nucleus, Zuckerberg unveiled the social networking site’s new music feature at the f8 conference in San Francisco today.

The music feature, which is tied to both the new Timeline feature and the new Ticker, allows Facebook users to see what their friends are listening to via the Timeline or in real-time on the Ticker. Friends can comment on music or chat with each other in real-time. On the Timeline, users can display their playlist from music streaming sites like Spotify and Rdio. According to Billboard, “Any digital music service (or really any other content service) can use Facebook’s new API to integrate themselves into the platform. Not only will that allow subscribers to authenticate themselves using their Facebook login, it also gives them an option to add any song, album, radio channel or artist that they subsequently listen to on that service to appear on Facebook for others to see.”

Ticketing sites jumped on the bandwagon too. The new platform also allows users to see when friends buy concert tickets.

What does this mean for the music industry?

If you subscribe to the same music-streaming service as a friend, you may duplicate their playlist on your own account, but if you use a different service, you can only view your friend’s playlist. However, in typical Facebook fashion, there will most likely be an easy hover-induced window asking users if they wish to join that service.

Macworld reported, “Streaming music services have added social networking components, but it’s been a hard sell because most people don’t see the value in ‘renting’ their music, thus making it difficult to find friends who belong to one of these services.” Facebook and these music services hope the feature facilitates more accounts for various streaming sites. And if that does happen, perhaps one site will gain traction and popularity on Facebook, eventually dominating the scene.

However, as Macworld suggested, it’s still only renting music. You can’t actually own it and put on it on your computer or ipod (or make a mix CD like some people still do). Maybe when everyone owns a 3G or 4G phone (which could be soon) with music service apps they will be more apt to pay for renting music. Most likely, people who refuse to pay for subscriptions will look up the bands their friends are listening to, youtube some videos and then purchase what they like on iTunes.

But, this new Facebook feature does establish a potential hub for online music sharing and discovering. Although the actual streaming won’t take place inside Facebook, the musical connections and interactions with friends could converge on Facebook. Also, musicians and record labels probably will concentrate promoting efforts on Facebook.

Privacy on Facebook continues to be a controversial subject. Users must be smart. Although letting someone see what your listening to doesn’t pose any foreseeable danger, if you happen to be embarrassed by your guilty pleasure playlist, be careful not to publish it (although, I would encourage everyone to not be ashamed of any music they listen to). Slate reported, “Zuckerberg calls this ‘frictionless’ sharing. What he means is that I don’t have to bother with the ‘friction’ of choosing to tell you that I like something. On Facebook, now, merely experiencing something is enough to trigger sharing. Once I sign up for Spotify’s Facebook app, my consent is assumed.” I’m not exactly sure how automatic the sharing is, or if there is a way to specify you don’t share, but users should pay attention.

On the other hand, if Facebook does develop into a converging point for the online music industry and users rely on each other for sharing and discovering music, this will create a larger role for music listeners. Instead of the media (or radio DJs or MTV DJs as in the past) deeming what the next thing in music is, Facebook users will influence what’s big in music. This only continues the trend that started when music went digital. Early music bloggers started as music listeners. Thousands of blogs today aim to get what they consider to be good music out in the public.